Another New ‘Mansion Tax’ for Connecticut in 2021?

UPDATE: A General Assembly Finance Committee public hearing on the proposed new “mansion tax,” set forth in Senate Bill No. 171, is scheduled to be held via Zoom on Monday, March 15. Sign up here to offer testimony or comments. The hearing, beginning at 9 a.m., may be be viewed on YouTube.

The odds are against implementation, but at least one Democratic leader in the Connecticut General Assembly is proposing a new annual “mansion tax” on homes with a market value exceeding $430,000.

This proposed new tax would come on top of annual property taxes that homeowners pay to the municipality in which they own property—and it follows a different type of mansion tax that took effect July 1, 2020, which increased the conveyance tax on homes selling for more than $2.5 million.

State Sen. Martin Looney, the Senate president pro tempore whose district includes parts of New Haven, Hamden and North Haven, is proposing the new tax at a time when Connecticut faces deficits of $1 billion in each of the next two fiscal years, according to The Hartford Courant, but also when the state’s rainy day fund is expected to reach $3.5 billion, a record.

Looney cites the economic disparity reflected in the tax rates of Connecticut municipalities—affluent Gold Coast towns like Greenwich and Darien vs. fiscally challenged cities like New Haven and Bridgeport—and argues the roughly $74 million a new mansion tax would reap from “the rich” communities could redistributed to “the poor” towns and cities.

Whatever one thinks of that socio-economic political philosophy, here’s how Connecticut property owners would be impacted:

While that may not seem significant to some, at least two factors are causing concern.

Tammy Felenstein, president-elect of the Connecticut Association of Realtors, told News 12 that the median asking price in Fairfield County is more than $650,000.

In that news report, Looney said, “It is a very slight increase spread very broadly across the state, so it’s not something that would be burdensome on anyone … And yet, it would create a substantial pot of money to address some of our inequities and problems.”

Governor Lamont, a fellow Democrat, doesn’t support a new mansion tax, according to the Courant, and labeled homes valued in the $430,000 range “middle-class houses.”

The impact of a new tax could prove more of a burden on the owners of commercial property.

The Yankee Institute for Public Policy notes that Connecticut’s struggling cities have some of the highest property tax rates in the state and are also home to significant commercial properties—which would not benefit from an exemption for the first $300,000 of assessed value.

According to a Yankee Institute example of impact, the top 10 taxpayers in Hartford, including companies like Travelers and Aetna, would pay a combined additional $534,982 annually in taxes.

Should the new mansion tax be implemented, residential property owners would pay it on top of local property 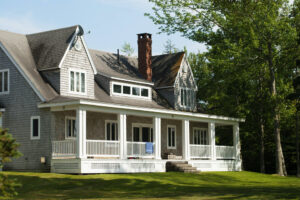 taxes, which are based on each municipality’s tax rate (mill rate). One mill equals $1 in taxes for each $1,000 assessed value. To calculate your tax bill, multiply your property’s assessed value by the mill rate in your town or city and then divide by 1,000.

For example, a residential property with a market value of $450,000, and assessed value of $315,000, would generate the following annual property tax bills in communities in our region:

Meanwhile, those who sell very expensive homes in Connecticut—valued at more than $2.5 million—began paying a higher conveyance tax as of July 1, 2020.

That “mansion tax” was prompted by concerns about pre-COVID population trends and the exodus of wealthy residents from Connecticut. Sellers suddenly saw the portion of the conveyance tax for whatever value exceeded $2.5 million increase to 2.25 percent.

That translates into an additional $15,000 on a property selling for $4 million, for example.

The “carrot” in this carrot-and-stick measure allows the seller of a high-end home who remains in Connecticut to claim 1/3 of the higher tax as a deduction each year over three years, beginning in 2023. On that $4 million sale, for example, the seller would claim a deduction of $11,250 each year.

Connecticut’s so-called mansion taxes are just one of many complex issues involved in the transfer of property, both residential and commercial. For example, those very expensive homes being sold—and all real estate transactions—are also subject to local conveyance taxes, generally 0.25 percent of the sales price, but 0.50 percent in 18 of the 169 towns and cities in Connecticut.

Cramer & Anderson has a highly-experienced team of real estate attorneys working in our six regional offices who have broad knowledge of residential and commercial real estate transactions, as well as decades of experience with the spectrum of issues that can arise from the purchase, sale, and ownership of property. These can include boundary, land-use, zoning, and environmental issues, as well as municipal compliance concerns.