Another State Agency Says Candlewood Solar Should Be Stopped

An independent state environmental watchdog agency is urging the Connecticut Department of Energy and Environmental Protection (DEEP) not to waver in finding the controversial Candlewood Solar plans unsuitable because there’s no possibility of mitigating the project’s grave impact on the threatened northern slimy salamander.

The Council on Environmental Quality (CEQ), whose role includes reviewing Environmental Impact Evaluations state agencies develop for major projects, is lobbying DEEP Commissioner Katie S. Dykes “to uphold the integrity of the State’s Endangered Species Act as it applies to this location and stand behind the scientific determination of its staff, unless there is conclusive and overwhelming contrary evidence.” 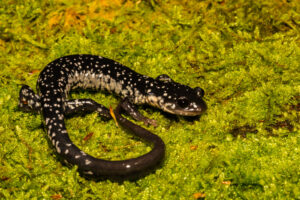 A close up of a Northern Slimy Salamander in natural habitat.

“I have determined that the revised Candlewood Solar Project threatens the continued existence of [the species] … and if allowed would result in the destruction and adverse modification of essential habitat to the [species],” DEEP Environmental Analyst Dawn M. McKay wrote in her Natural Diversity Data Base (NDDB) State Listed Species Review final determination.

The NDDB determination is a step in Candlewood Solar’s process of seeking a stormwater management permit (SMP).

A Hearst Connecticut Media story about the Oct. 20 determination and Cramer & Anderson Partner Dan Casagrande’s role representing the Town of New Milford on the Candlewood Solar issue quotes an email from DEEP media relations manager Will Healey calling the NDDB finding “a biological opinion in one area of consideration in advance of submission of a stormwater permit application.”

“DEEP is open to considering mitigations or other options that might address these specific concerns,” Healey added, according to the Hearst story.

However, McKay determined “[t]here is no opportunity to mitigate this essential interior forest loss of micro-habitat on site or off-site because of the unique and uncommon nature of the Plethodon glutinosus micro-habitat requirements.”

“It is an extremely rare occurrence when a State Threatened Species is likely to be extirpated as a consequence of a single proposed activity,” Hearn wrote in his letter to Commissioner Dykes. “It is even more uncommon that there is no opportunity to mitigate this loss on site, or off site, because of a species’ unique habitat requirements.”

Hearn points out that under Connecticut environmental laws, state agencies “shall conserve endangered and threatened species and their essential habitats, and shall ensure that any action authorized, funded or performed by such agency does not threaten the continued existence of any endangered or threatened species or result in the destruction or adverse modification of habitat designated as essential to such species… .”

While noting the law allows for exceptions if certain conditions are met, Hearn explains that one of those conditions is the ability to implement “reasonable mitigation and enhancement measures necessary and appropriate to minimize the adverse impacts of the action upon the species or essential habitat… .”

The CEQ has been tracking the Candlewood Solar project since August 2017, when it cited “inadequate” data on potential impacts to vegetation and wildlife and called for a comprehensive environmental impact analysis.

The results of the most recent analysis led to McKay’s Oct. 20 determination that “the project should not move forward.”

The NDDB determination represented another setback for the Candlewood Solar plans, whose direct and indirect impacts would result in a further loss of 115 acres of core forest habitat.

“Connecticut’s official environmental agencies are unified in concluding the Candlewood Solar project would cause irreparable harm to the vibrant habitats, undisturbed forest, and scenic beauty of Candlewood Mountain and New Milford,” Attorney Casagrande said. “It’s also clear a project this large and invasive cannot be revised or tailored to move forward safely and sensitively on this site.”

Candlewood Solar, however, appears to be preparing another attempt to win an SMP, according to a recent status report as part of a lawsuit in New Britain Superior Court in which the citizens group Rescue Candlewood Mountain is challenging Siting Council approval of the project.

Our attorneys and staff are working in our offices, where proper sanitation and social distancing measures remain strictly observed amid the COVID-19 coronavirus, as well as remotely.

Attorneys are available as usual by phone or email, and are also connecting with clients using technology such as Zoom. For more information, see the firm’s website or call the flagship office in New Milford at (860) 355-2631. Other regional offices are located in Danbury, Ridgefield, Kent, Washington Depot, and Litchfield.