When community members in Kent, Conn., gather Sept. 28 to celebrate two local nonprofits joining forces as a way to enhance the vital missions of both, they’ll also be affirming the behind-the-scenes work of Cramer & Anderson Partner Dolores “Lorry” Schiesel. 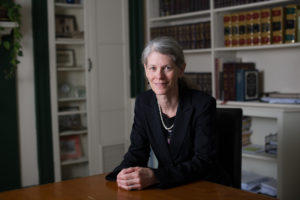 Attorney Schiesel, the resident partner in the firm’s Kent office, is both a founding member of the Kent Community Fund (KCF) and the attorney who handled the legal work underpinning the merger of the much older Kent Nursing Association (KNA) into the KCF.

Initially, the 75-year-old KNA approached KCF members to discuss a desire to expand its mission, Attorney Schiesel explained. That led to the consideration of strategically joining forces.

Attorney Schiesel explained the thought process: “If this older group expands its mission, and its mission looks just like that of this other group, what if we combine our missions? What would this look like and could this work?”

The answer was combining forces would create a stronger local nonprofit, enhance existing missions that dovetailed, and create the possibility of having an even greater positive impact in the future.

KNA, which once had its own nurse who visited the local elementary school and made home visits, had evolved into a sort of clearinghouse, receiving requests and referrals from the town’s director of social services and the medical community, and then arranging skilled nursing visits by the local VNA groups it supported. KNA also provided support for flu clinics and educational events.

Established in 2006, KCF had a broader mission of providing a helping hand—in the form of confidential grants and aid—to individuals in town facing economic pressures due to illness, job loss or catastrophic events such as

fires or accidents. KCF arranges for the help needed through grants made directly to service providers. Grants, made after other sources such as fuel banks and government entitlements have been utilized, cover things like home heating fuel, medical expenses, prescription medications, utility bills, and housing emergencies.

KCF also supports community charitable programs, with a priority on support for children and families. Its referrals come primarily from social services, but also from local clergy, school and hospital social workers and other medical and social services providers. KCF has award more than 470 confidential grants totaling over $248,000 since 2006.

Both KCF and KNA were entirely volunteer operations—no paid staff and no overhead expenses—and while the missions were similar, there were gaps in what could be done within the overall goal of neighbors helping neighbors.

“In the old days, if the VNA saw something was a problem in the home that didn’t fit under the menu of medical services, they couldn’t do anything about it,” Attorney Schiesel said, giving one example.

With KNA now merged into KCF, any ambient problem can be addressed. “If your nurse sees something that’s not medical but needs to be addressed, she can call and we can get involved,” Attorney Schiesel said. “Our grants go in every direction.”

While it became clear from discussions that merging was a good idea, the next step was to deal with the complexities of meeting the legal requirements.

“We had to negotiate what the new mission would look like,” said Attorney Schiesel, explaining that the boards of both groups had to approve an identical plan of merger—a plan carefully crafted so KNA, the group giving up its name, didn’t see its mission or history lost even though it was technically ending its existence.

That meant, in part, merging the two boards into one larger board, and guaranteeing a place at the table for members of the former KNA board, in part to preserve the continuity of the work KNA had been doing.

New bylaws had to be created, voted upon, and filed with the Secretary of the State.

Formally, the new purpose and objective of the merged organization is:

“It makes so much sense,” Attorney Schiesel said of merging nonprofits with similar missions and similar challenges. “It can be done, and it can be done gracefully and for mutual benefit.”

The Kent joining of forces was completed June 30, and now those involved will be celebrating the partnership designed to better benefit the community and its residents.

A reception with food and beverages is scheduled for 4 p.m. Sept. 28 at St. Andrew’s Parish Hall. About 100 invitations have been sent to those involved with the two nonprofits and others, and members of the public are invited to attend.