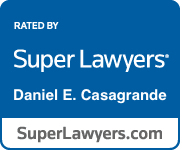 Cramer & Anderson Municipal Law Partner Dan Casagrande has been selected to the 2022 Connecticut Super Lawyers list, an honor reserved for attorneys who exhibit excellence in their practice.

Only 5 percent of attorneys in Connecticut receive the distinction, according to Super Lawyers, a rating service for outstanding attorneys whose selection process combines peer nominations and evaluations with independent research. Candidates are evaluated on 12 indicators of peer recognition and professional achievement.

Selections are made annually on a state-by-state basis with the goal of creating a comprehensive and diverse list of outstanding attorneys that can be used as a resource for attorneys and consumers searching for legal counsel.

Each year’s list is published in Super Lawyers Magazine, as well appearing as a special section in the November issue of Connecticut Magazine.

“It is a great privilege to receive the Super Lawyers designation,” Attorney Casagrande said. “Cramer & Anderson’s lawyers strive for excellence in all our practice areas, and while this recognition is humbling and gratifying, the most rewarding part is that it reflects and affirms the work we do for our clients. Being honored with awards and distinctions means we have done well for them, and that’s what it’s all about.”

Attorney Casagrande’s selection to the 2022 Connecticut Super Lawyers list follows his earlier prestigious awards and significant outcomes in a number of high-profile issues and cases.

Among the awards, Attorney Casagrande was named a Marvin J. Glink Private Practice Local Government Lawyer of the Year by the International Municipal Lawyers Association (IMLA) in 2019.

In 2018, he was honored as the “Giant Slayer” among Connecticut counsel—a designation bestowed by the Connecticut Law Tribune (CLT) for his high-profile Municipal Law work on behalf of towns and cities, notably in tax appeal cases. In 2021, he was a finalist for the CLT’s Game Changers award.

Additionally, Attorney Casagrande won a major antitrust case in the Connecticut Supreme Court in spring 2020. The decision overturned a decades-old precedent saying that tying agreements for real estate brokerage fees violate the Connecticut Antitrust Act. The court essentially ruled that antitrust law had evolved through federal actions in ways that invalidated the Connecticut precedent established in a 1981 decision.

Attorney Casagrande, whose practice also focuses on Planning & Zoning Land Use and Land Use & Environmental Law, has served as an outside Assistant Corporation Counsel for the City of Danbury from 1990 through the present, and has served multiple-year engagements as Town Attorney for New Milford and New Fairfield.

Additionally, Attorney Casagrande has also been retained for special counsel assignments on behalf of Ridgefield, Middlebury, Southbury, New Milford, Waterford, Cheshire, Bethany, Beacon Falls, and the City of Waterbury, for which he handled a complex and “historic change” in municipal government.

See his profile page to learn more, and contact Attorney Casagrande by phone at 203-744-1234, or by email at dcasagrande@crameranderson.com.