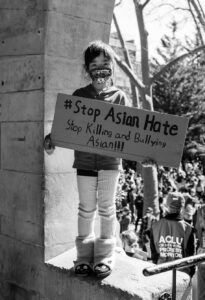 UPDATE: We’re heartened to see the Senate pass legislation to more forcefully investigate hate crimes, especially those against members of the Asian American and Pacific Islander community (AAPI), as the Washington Post reports.

The killings of six Asian women as part of mass shootings at Atlanta area spas and massage parlors in March tragically exposed the bias, bullying, and violence Asian Americans in the U.S. have been experiencing for a very long time.

News reports have been filled with stories and videos depicting hate crimes against Asian Americans in cities across the country. Asian and Pacific Islander Americans say the racism and violence have reached the highest levels in their lifetimes—and no member of these vibrant communities, so rich in history, heritage, and culture, is immune, as demonstrated when Olympic snowboarding gold medalist Chloe Kim recently spoke out about her experiences.

In a statement released following the Georgia killings, CAPABA noted that according to Stop AAPI Hate, an organization formed in March 2020, “nearly 3,800 racist incidents targeting people of Asian descent have been reported during the last year.”  CAPABA also pointed out that while hate crimes overall decreased 7 percent from 2019 to 2020, according to a study by the Center for the Study of Hate and Extremism (CSUSB), the 3,800 racist incidents targeting people of Asian descent represented a 149 percent increase.

The website for the March 26 #StopAsianHate rallies, based on an initiative begun by U.S. Rep. Grace Meng and California Assembly member Evan Low, frames the problem our nation faces in a way that should hit home for all of us, no matter our heritage, saying, “Folks are being targeted for the language they speak, their accent, where they work, their culture — let’s end the violence together.”

Cramer & Anderson condemns violence and racism at all times, and stands in solidarity with the Asian American and Pacific Islander community in demanding a commitment to legal and social justice for all. Together we must work to end discrimination, combat racism, and stop baseless hate in all of its forms.