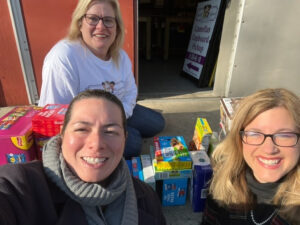 Cramer & Anderson dropped off a holiday donation of food to Camella’s Cupboard Food Pantry for Children in New Milford for a second year on the day before Thanksgiving.

The nonprofit provides year-round hunger relief to children, seniors, and other vulnerable populations in the Greater New Milford community with its weekly food distributions and special initiatives around the holidays.

In an effort led by Partners Jennifer Collins and Lisa Rivas, the firm contributed roughly $350 worth of snacks and beverages for children.

The firm’s donation comes amid a sharp rise in demand.

In an Oct. 30 post on Facebook, Camella’s Cupboard said 99 new individuals, 89 of them children, had signed up for assistance since Sept. 1, and noted, “If you are in a position to help, please consider a donation. We are receiving less food from grocery stores and CT FoodShare, which means we have to purchase more.”

The continuing dramatic increase in demand also prompted this message on the Camella’s Cupboard website: “Due to an overwhelming request for assistance, it is necessary for us to close registrations for new families until after the beginning of 2023.”

“We all hear the news reports about inflation and its impact on families but many of us don’t see that impact directly like they do at Camella’s Cupboard,” Attorney Collins said. “Executive Director Angela Chastain told us the volunteer-run operation serves 200 families a week and 300 children. For Thanksgiving they gave out packages of holiday food items to 250 families. That represents significant need in our communities.”

“Cramer & Anderson prioritizes being an active member of the community, especially in the towns and cities where our six offices are located,” Attorney Rivas said. “Our flagship office in New Milford is only a short distance from Camella’s Cupboard in the Lillis Administration Building on East Street. We’re honored to be able to help our neighbors with donations like this one.” 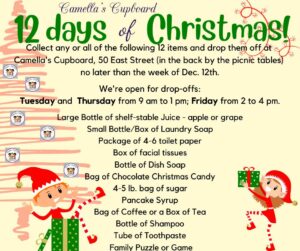 Anyone who would like to assist Camella’s Cupboard can make a monetary donation online, or donate food.

There are also ongoing holiday initiatives to assist with, including a 12 Days of Christmas effort and Stuff a Stocking. Details are on the Camella’s Cupboard website and on the Facebook page.

Attorney Collins and Attorney Rivas also led a recent donation of 10 upright shopping carts to the Daily Bread Food Pantry in Danbury to give clients without vehicles a way to transport the food they pick up.

And in a similar effort over the summer, the firm’s Litchfield office participated in the Stock the Shelves food drive for the Community Soup Kitchen of Torrington, Friendly Hands Food Bank, FISH NWCT, Fishes & Loaves Food Pantry in Canaan, the Goshen Food Pantry, the Thomaston Community Pantry, the Open Door Soup Kitchen in Winsted, Hands of Grace in Pine Meadow, and the student food pantry Food For Thought at Northwestern CT Community College. 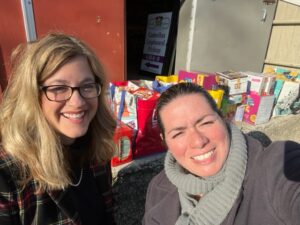 “With soup kitchens and food banks seeing rising numbers of families needing help as inflation rises and donations drop, a group of area business leaders have launched an effort to assure food banks get year-round support,” said Litchfield office paralegal and bookkeeper Peggy C. Geddes, who set up a collection bin in the reception area of the office for donations.

About Attorney Collins and Attorney Rivas

Attorney Collins’ practice focuses on Personal Injury Law, Social Security Disability, and Workers’ Compensation. She may be reached by email at jcollins@crameranderson.com, or by phone in the Danbury office at (203) 744-1234.

Attorney Rivas primarily practices Immigration Law. She may be reached by email at lrivas@crameranderson.com, or by phone in the Danbury office at (203) 744-1234.