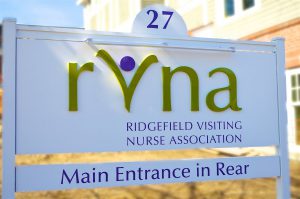 “In addition, the committee oversees the 403b retirement plan as well as the agency’s 501c3 status,” Ms. Santoro said.

RVNA seeks Finance Committee members who have a financial and legal background, as well as experience with tax auditing and financial planning.

Ms. Santoro called Attorney Weinshank, whose practice is focused on Estate Planning and Trusts, along with Elder Law, a perfect fit for the Finance Committee—especially at a time when RVNA is growing and expanding with the creation of a Hospice program.

“I’m honored to have been entrusted by RVNA with helping to manage and guide its growth and success,” Attorney Weinshank said. “I have long admired RVNA and been impressed by the magnitude of its positive impact on Greater Ridgefield. I’m excited to now be a part of those efforts, especially as I live in town with my family.”

RVNA has a staff of nearly 300 employees working across a number of business lines, including rehabilitation, home care, and a physical therapy center. Last year alone, more than 46,000 home visits were logged, serving 1,500 patients.

RVNA provides compassionate care to all individuals, whether young or old, through a continuum of care that encompasses health care at home and in the community. RVNA also provides home health aides and companionship through a non-medical subsidiary called HomeCare by RVNA and outpatient physical, occupational and speech therapy in its Rehab by RVNA facility at 27 Governor Street in Ridgefield.

In another new Ridgefield role, Attorney Weinshank has been appointed to the Board of The Ridgefield Playhouse.

In nominating Attorney Weinshank, Cramer & Anderson Partner Ken Taylor said he represents “the epitome of a New Leader in the Law” by engaging in “high-caliber volunteer community service” as a way of giving back, while also laying the groundwork for cultivating new clients and driving growth and success for the firm.

In 2016 Attorney Weinshank was appointed to the new Planned Giving Advisory Council formed by Ability Beyond, the Connecticut organization helping “thousands of people with physical and mental disabilities discover their abilities and become a part of their communities.” Less than a year later, based on his leadership, Attorney Weinshank became Co-Chair of the committee.

Earlier this year, Attorney Weinshank was named to the Associate Board of the Danbury Hospital & New Milford Hospital Foundation. Directors work with Foundation staff to foster charitable giving in support of the mission of the hospitals and their parent entity, Western Connecticut Health Network.

“The drive to help others selflessly, and to capitalize on challenging opportunities to elevate the firm, make Attorney Weinshank a perfect choice for a New Leaders in the Law award,” Attorney Taylor said in nominating Attorney Weinshank.

Attorney Weinshank may be reached by email at jweinshank@crameranderson.com and by phone at the Ridgefield office at (203) 403-4005. The address of the new office is 38C Grove Street.