WFSB Channel 3 Eyewitness News opened its 11 p.m. newscast Oct. 31 with the dramatic story of a Brookfield woman, Carol Degen, who hired a contractor to renovate the kitchen and bathroom of her modest house—and wound up with the house gutted, deep in debt, and essentially homeless.

Read the powerful WFSB story and watch the video

Since the story aired and has been widely circulated on social media, response in the community has been swift and caring—to the point that WFSB reporter Eric Parker presented an update today (Nov. 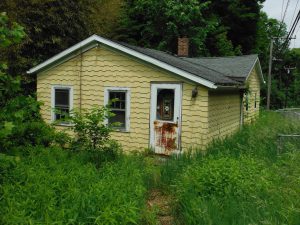 2) at 5:30 p.m., announcing the outpouring of support from contractors, Brookfield residents and others who want to help the Degen family rebuild.

Those efforts are being coordinated with the Holland Family Foundation, which rescued the Degens after the ordeal with their home and has provided the family with housing in New Milford.

Anyone who wants to assist the effort to rebuild the Degens’ home in Brookfield may contact Pat Holland at (860) 490-9276 or by email at pholland96@snet.net.

Additionally, a “Help the Degen Family” GoFundMe page has been created by Rick McCarty, a classmate of Billy Degen’s from Brookfield High School who is part of a group of Brookfield High alumni coming together to help the family. The GoFundMe campaign has a goal of $75,000.

Another force in the local efforts to help the Degen family is Brianna Ruocco, who works at MAX BMW Motorcycles in Brookfield and is operations manager for four motorcycle stores.

“I’ve lived in Brookfield for 10 years and have driven by the house often,” she said. “We need to do something. It’s a small community. Everybody helps each other.”

She’s working with Pat Holland and Rick McCarty, and said all those spearheading the efforts to aid the Degen family will meet next week and talk about a strategy.

Meanwhile, a Facebook group page, Community to Help the Holland Family Foundation Rebuild the Degen Home, has been created as a way of tying all the efforts together.

News of the Degen family’s nightmare has spread so far that even Drew Scott from the HGTV show “Property Brothers” Tweeted WFSB to say that he had seen Eric Parker’s I-Team Investigation and felt bad for the family.

Cramer & Anderson Partner John Tower is the attorney who worked with WFSB to highlight the plight of the Degen family. He filed suit against the Danbury contractor hired by the Degens, winning a court judgment against the contractor of roughly $471,000 that hasn’t been honored.

John Tower is a Civil Litigaton Partner in Cramer & Anderson’s New Milford office and may be reached by phone at 860-355-2631, and by email at jtower@crameranderson.com.

The firm also has offices in Litchfield, Danbury, Kent and Washington Depot. To learn more, see the website at www.crameranderson.com.