When Your Tree Falls On Your Neighbor’s Property, Who Is Liable For Damages? 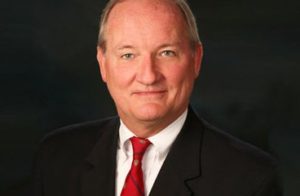 Everyone has heard the clichéd bit of pop-philosophy that asks if a tree falling in a forest makes a sound. It’s not quite as silly as it seems. In one philosophical view, the answer is no—that without someone to perceive the sound, there isn’t one. Perhaps surprisingly, the scientific answer is also no—a falling tree creates not sound but a vibration of the air; it takes the mechanics of the human ear to render the vibration as sound.

When the falling tree, or even a large limb, is real and causes injury or damage, the question isn’t about sound.

Instead, it’s about potential liability on the part of whoever owns the property where the tree is located—a private property owner, the state, or even a tenant renting a property.

The most clear-cut circumstance is when an otherwise healthy tree falls because natural factors such as a strong wind or a lightning strike, which are considered acts of God for which no one is liable.

“Previously there was an attitude that if trees fall in rural areas, no one is responsible,” said Cramer & Anderson Partner Robert L. Fisher, Jr., who works in the firm’s Washington Depot office and primarily represents purchasers, sellers, and financial institutions in residential and commercial real estate transactions.

That extension of the act-of-God view generally to rural areas ended in part because of the case Toomey v. State of Connecticut, (J.D. Litchfield, 1994), prompted by a tragic incident in rural northwestern Connecticut. Two members of a family were killed and another injured when a limb from a tree located on state property fell on the car in which they were traveling.

“The tree was visibly rotten and the state was aware,” said Attorney Fisher, explaining that the state has liability for trees on public land if it has been put “on notice that trees are in need of being taken down, or pruned, or having cabling to keep them from falling apart.”

Awareness is also the key when it comes to trees on private property.

“Surprisingly, you might not be liable at all, unless you had knowledge that the tree was dead, diseased, or likely to fall prior to the actual fall,” Attorney Fisher explained. “If the tree appeared healthy prior to the fall, you are not responsible for any damage that the falling tree caused on your neighbor’s property.”

Conversely, any property owner aware that a tree is diseased or rotten is likely to be responsible if it causes damage or injury to someone.

“If you had knowledge that your tree was dead or diseased prior to the fall, then it was your responsibility to take it down or take other steps to prevent it, or its branches, from falling on your neighbor’s property,” Attorney Fisher said. “In Connecticut, as in most states, your failure to remedy a known hazard on your property that can cause harm to your neighbor or his property is considered negligence. The law requires homeowners to take reasonable steps to identify and deal with a hazardous condition on their property, especially when the hazardous condition is obvious and could cause damage to a neighbor or his property.”

Like the philosophical riddle about a tree falling in the forest, the law on actual trees falling isn’t quite as simple as it might seem.

If a limb from a diseased tree on your property falls and injures a neighbor, he or she could hold you liable, but if 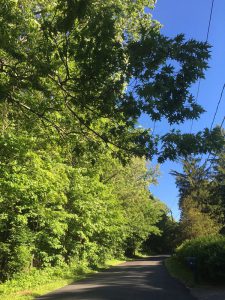 Trees on state property hanging over a country road in Morris.

the same limb crushed the neighbor’s car, the damage would be covered under the comprehensive coverage aspect of the neighbor’s auto insurance—though the neighbor might take action to cover any deductible, or the neighbor’s insurer may cite negligence and seek to have your insurance company pay the claim.

“There are wheels within wheels and many layers of the onion to go through,” said Attorney Fisher of the complexities that can come into play with an otherwise straightforward law.

“The law is as long as you don’t create the hazard and are not aware of it, you’re not liable if somebody gets hurt by it,” said Attorney Fisher, who noted a different type of example from the same arena, saying an open well that has existed on someone’s property for 50 years exposes the owner to liability.

One circumstance that many might not anticipate involves liability extending past the property owner to those renting a house or other type of property.

“If you rent a house, you have exclusive control over it,” said Attorney Fisher, explaining that liability attaches to that control and may extend to all parts of a property over which the tenant has control. (Common areas, especially in multi-family situations, remain the responsibility of the property owner.)

“The likelihood of anything happening is remote, but when it does and it’s serious, everybody is scrambling,” said Attorney Fisher. “I guess the takeaway on this is it would certainly be prudent to check out your property when you buy it, or are renting it, that could cause harm to somebody else, even a trespasser.

Attorney Fisher may be reached in the Washington Depot office at (860) 868-0527, and by email at mailto:rfisher@cramer-anderson.com.