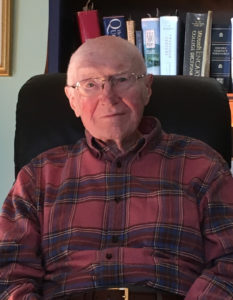 One of Cramer & Anderson’s founding partners, Henry B. (Hank) Anderson, has won a Lifetime Achievement Award as part of the Connecticut Law Tribune’s 2018 Professional Excellence awards.

Cramer & Anderson won four awards this year, and the honorees will be recognized at a May 24 awards dinner at the Bond Ballroom in Hartford.

The award for Mr. Anderson, who is retired and living on Cape Cod, was based on a nomination letter submitted by Partner Robert L. Fisher, Jr.

Here’s the nomination in full:

Cramer & Anderson Founding Partner Henry (Hank) B. Anderson turns 100 on May 30, and his life has been as distinguished as his 50-year legal career in Connecticut.

The son of a dentist, Anderson completed his undergraduate degree at Wesleyan University in 1940 and joined the Navy in 1941 as World War II intensified. He survived kamikaze attacks on two aircraft carriers in the same week.

On the same day in June 1948, Anderson received his law degree from the University of Connecticut School of Law in Storrs, and then travelled to Middletown to receive a master’s degree at Wesleyan.

Anderson found a home as an attorney in western Connecticut in the 1950s. His small firm Anderson and Altermatt merged on Jan. 1, 1962, with Cramer, Blick, Fitzgerald and Hume to become Cramer & Anderson. He retired December 31, 1998, and lives now on Cape Cod with his wife, Bunny.

“During his fifty years of law practice in the New Milford area Anderson was heavily active in the legal community,” says a UConn Law Alumni Spotlight story. “He was a founder of the Connecticut Attorneys Title Insurance Company and served as a director on the executive committee. He also served on the Connecticut Bar Examining committee in multiple capacities—member, secretary, and eventually chairman. He was president of the Litchfield County Bar Association, Chairman of the real property section of the state bar, and served as director of Connecticut Legal Services in Middletown.”

He served for a decade on the Grievance Committee for Litchfield County, and Gov. Lowell P. Weicker, Jr. appointed Anderson a member of a statutory group that supervised distribution of funds by legal service organizations in Connecticut.

In the town of Sherman, where Anderson lived for many years, he was Judge of Probate. (He also served on the Executive Committee of the Connecticut Probate Assembly.) As a trial justice he presided over the local Justice of the Peace court. He was the first town counsel for Sherman and held the post for approximately 25 years.

“In addition to his military accolades, Anderson was the recipient of numerous distinguished legal awards,” the UConn Law story says. “In 1989 he was voted Citizen of the Year by the State of Connecticut Courts of Probate. In 1990 The Connecticut Bar Association awarded him the John Eldred Shields Award for his professional services to the community at large—over 900 hours of pro bono services. He was also voted Probate Attorney of the Year by the Connecticut Probate Assembly.”

“No matter the demands upon him during the 42 years of his distinguished career, Henry B. Anderson has always made time to serve his profession and his community with brilliant ability and genuine compassion,” the Shields Award citation said.

In addition to the Lifetime Achievement Award for Mr. Anderson, Partner Randy DiBella has been named one of the Best Mentors among Connecticut attorneys, Partner Daniel E. Casagrande won the Giant Slayer award, and Attorney Christopher Sochacki won a Distinguished Leaders award.

Cramer & Anderson has offices in New Milford, Danbury, Ridgefield, Litchfield, Kent, and Washington Depot. For more information, see the website at www.crameranderson.com or call the New Milford office at (860) 355-2631.