Attorney Daniel E. Casagrande is the “Giant Slayer” among Connecticut counsel—a designation bestowed by the Connecticut Law Tribune for his high-profile Municipal Law work on behalf of towns and cities, notably in tax appeal cases. In July 2019, he won another prestigious award, being named a Marvin J. Glink Private Practice Local Government Lawyer of the Year by the International Municipal Lawyers Association (IMLA), and in 2022 he was named to the Connecticut Super Lawyers list.

He has served as an outside Assistant Corporation Counsel for the City of Danbury from 1990 through the present, and has served multiple-year engagements as Town Attorney for New Milford and New Fairfield. Additionally, Attorney Casagrande has been retained for special counsel assignments on behalf of Ridgefield, Middlebury, Southbury, New Milford, Waterford, Cheshire, Bethany, Beacon Falls, and the City of Waterbury, for which he handled a complex and “historic change” in municipal government.

In spring 2020, Attorney Casagrande won a major antitrust case in the Connecticut Supreme Court. The March 24 decision overturned a decades-old precedent saying that tying agreements for real estate brokerage fees violate the Connecticut Antitrust Act. The court essentially ruled that antitrust law had evolved through federal actions in ways that invalidated the Connecticut precedent established in a 1981 decision.

The Town of Waterford subsequently retained Attorney Casagrande when Dominion Nuclear Connecticut, Inc., owner of the Millstone Nuclear Power Station, appealed the town assessor’s $1.2 billion valuation of Millstone for tax purposes. After a four-year battle and a 24-day bench trial, the court preserved 93 percent of the town’s valuation in what is believed to be the largest assessment appeal litigated in Connecticut.

When Danbury was sued over landfill odors by 350 plaintiffs in Bethel, who hired attorneys affiliated with the firm made famous in “Erin Brockovich” and demanded $120 million, Attorney Casagrande secured a settlement of $3.5 million, with all but $900,000 paid by the City’s insurers.

In the mid-1990s, a major developer was allowed to begin site work for high-end condos on municipal redevelopment property in Danbury before obtaining title or financing. After making $7 million in improvements, the developer couldn’t get financing. The City terminated the redevelopment contract and legal action ensued. In the end, an arbitration panel awarded the developer $0.

In an ongoing high-profile matter, Attorney Casagrande appealed Connecticut Siting Council approval of a large solar energy project in New Milford over the objections of citizens, officials and even state agencies. This project calls for destruction dozens of acres of valuable core forestland on Candlewood Mountain to make way for a 20 MW solar energy facility. Attorney Casagrande represents the group Rescue Candlewood Mountain in challenging Siting Council approval and also represents the Town of New Milford with regard to the project.

Attorney Casagrande once defended a defamation claim brought by a real estate developer who alleged the defendant defamed him in a YouTube video when he criticized affordable housing projects pending before a land use commission. These actions have become known as SLAPP suits—Strategic Lawsuits Against Public Participation. The trial court granted summary judgment for Attorney Casagrande’s client and ruled the statements in the video were not defamatory as a matter of law, and were protected by the First Amendment’s Fair Comment Doctrine.

An ex-officio member of the Connecticut Association of Municipal Attorneys board, Attorney Casagrande served as CAMA president of from 2011 to 2013. He has given numerous presentations at both the state and national levels on legal issues facing municipalities, including land use, tax appeals, Freedom of Information (FOI), and trials of complex valuation cases. 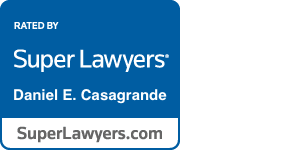 “[Partner Dan Casagrande] is a complete attorney in all aspects of municipal law. As my ratings … attest, Dan is an excellent communicator, writer, trial lawyer and researcher of the law. Most importantly, he is able to think ‘outside the box’ to get the ultimate results for his clients, and at an amazing price compared to most ‘high’ price lawyers who have never seen the inside of a courtroom. A definite ‘A” rated lawyer in every way possible.”