“Through the years we have been able to look towards [Attorney DiBella] for legal counsel, which plays a pivotal role in the execution of our duties,” Water Witch President David Golembeski said in a proclamation.

“Hours upon hours of phone calls, analysis of contracts, legal disputes, or questions about human resources have all been resolved due to his guidance,” the proclamation said, noting that Attorney DiBella’s commitment and service “exemplifies the foundational characteristics that this institution has been built on.”

“It’s a great addition to have him as an honorary member,” said Water Witch Capt. Sean Delaney, noting that Attorney DiBella joins the ranks of others who have been honored for assisting the fire company.

His impactful community service and pro bono work for New Milford first responders has been recognized and honored in the past.

Attorney DiBella also assists New Milford Community Ambulance with legal questions and matters, and in 2009 the ambulance corps made him an honorary member.

Armstrong, who died in 2013 had been president of the ambulance group for 36 years, logging more than 65 years of service in all. He had also been a member of the town’s Police Commission, as well as a community leader and volunteer with the American Red Cross and Rotary Club.

“I thought I was going to get a certificate of appreciation or something,” Attorney DiBella said after being surprised by the award at the ambulance corps’ annual dinner in 2016. “I had no idea I would get the Andy Armstrong Award. Andy Armstrong’s heroic. To be honored in his name, that’s a humbling thing to me.”

“Randy was obviously a unanimous choice,” ambulance Board of Directors member George Buckbee said at the time. He’s been extremely helpful to us.” 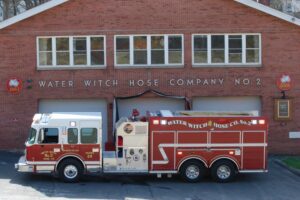 New Milford Community Ambulance Corp. has been providing emergency medical services to the community since 1929.

Water Witch was formed to protect the center of town following a disastrous fire in 1860. The first firehouse was located on Railroad Street, the next one was on Church Street, and the current firehouse on Grove Street was constructed in 1960, with an addition in 1986.

He works primarily in Cramer & Anderson’s flagship office in New Milford and lives in Litchfield.

Among the highest rated lawyers in Litchfield County, Attorney DiBella has received a rating of AV Preeminent® in the Martindale-Hubbell® Peer Review Rating™, which reflects that fellow attorneys consider him at the highest level of professional excellence.

On Aug. 5, Cramer & Anderson once again began requiring all visitors to our six regional offices to wear masks, including those who are vaccinated.

Our attorneys and staff are working in our offices, where proper sanitation and social distancing measures remain strictly observed. However, we also offer clients great flexibility and are available not only by phone or email but also via Zoom and other teleconferencing platforms.

For more information, see the firm’s website or call the flagship office in New Milford at (860) 355-2631. Other regional offices are located in Danbury, Ridgefield, Kent, Washington Depot, and Litchfield.